Rhys Yorke
© All rights reserved
About 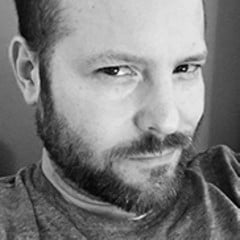 Rhys has always been in love with books and art, but his passion for stories began when he received a copy of “The Hobbit” for his birthday. Not long after, he was creating his own stories and taking his friends on adventures with table-top role-playing games, maps, monsters, and heroes.It wasn't until his third-grade class attended a local production of “Camelot” that he knew his calling was to be a storyteller. He immediately took to writing, acting, singing, and directing. A love that has stayed with him for many years.

His creative work has taken him into the comic book, television, film, animation, and video game industries — notably to work on Deadpool, ThunderCats, G.I. Joe, Battle of the Planets, Robotech, The Secret World, FarCry 5, the television series The Expanse, V-Wars, Polar, Titans, Blue’s Clues and You as well as concept art for Star Trek: Strange New Worlds.

Rhys is currently developing a video game, a graphic novel, and a stage-play.